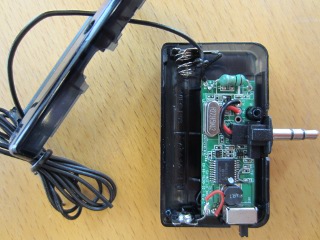 Interested as we are in swarming, our efforts include building sort of an army of moving bots. To keep cost down the available toys are our first port-of- call. We now have a collection consisting of flying (helium-filled zeppelin/balloon), driving (a few cars and robots) and swimming (submarines) units that are all remote controlled. Most of them use 27 MHz based RF, a few are on 49MHz, or even 2.4GHz (BT/Wifi/etc.). IR is also a frequently chosen solution.

To get communication up with all of them, enabling our software to become part of the swarm, we need a more or less universal solution connecting sensors and actors.

On the market there are a number of dongle suppliers that use the headphone connector to add an IR or RF extension to Android (and/or iPhone) smartphones. What makes life difficult is that the toys mostly use very cheap encoding solutions based on chips like RX2B / TX2B which are inflexible and difficult to combine with other coding options, either single chip based or not.

So, what is our master plan!? Make a dongle - or have a dongle made - that enables reprogramming it through the headphone connection! It would allow us to combine the advantage of off-loading the encoding to a dedicated chip (a PIC166XX comes to mind) and still retaining the flexibility for application programmers to adapt to the required protocol.

In the picture you see the JoyXtix dongle from Joybien. There are three ways in which this friendly manufacturer of dongles, based in Taiwan, can open up their API for application developers on Android or iPhone: